NEW EUROPEAN RULES ON THE DEFINITION OF DEFAULT: UNDERSTANDING HOW TO DEAL WITH THE CHANGES

As of 1 January 2021, UniCredit will apply the new European rules on the classification of defaulting counterparties (better known as "defaults").

The new regulation establishes more restrictive criteria and methods for the classification of default compared to those adopted by Italian intermediaries until now, with the aim of harmonising approaches to defining default and identifying the conditions of unlikeliness to pay across financial institutions and the different jurisdictions of EU member states.

The main changes envisage banks automatically defining customers as defaulting where there are arrears for over 90 days, for an amount which is, at the same time:

For private individuals and small and medium enterprises*

above €100 and above 1% of the Banking Group's total exposure

above €500 and above 1% of the Banking Group's total exposure

The calculation takes into account positions in place across all UniCredit Group companies.

There are also other changes, including:

Once the arrears have been cleared, and at least 90 days have elapsed from that time without further arrears situations or prejudicial events occurring, the default reporting obligation will lapse.

ASSIGNMENT OF ADVANCES WITH RECOURSE AND NON-RECOURSE1 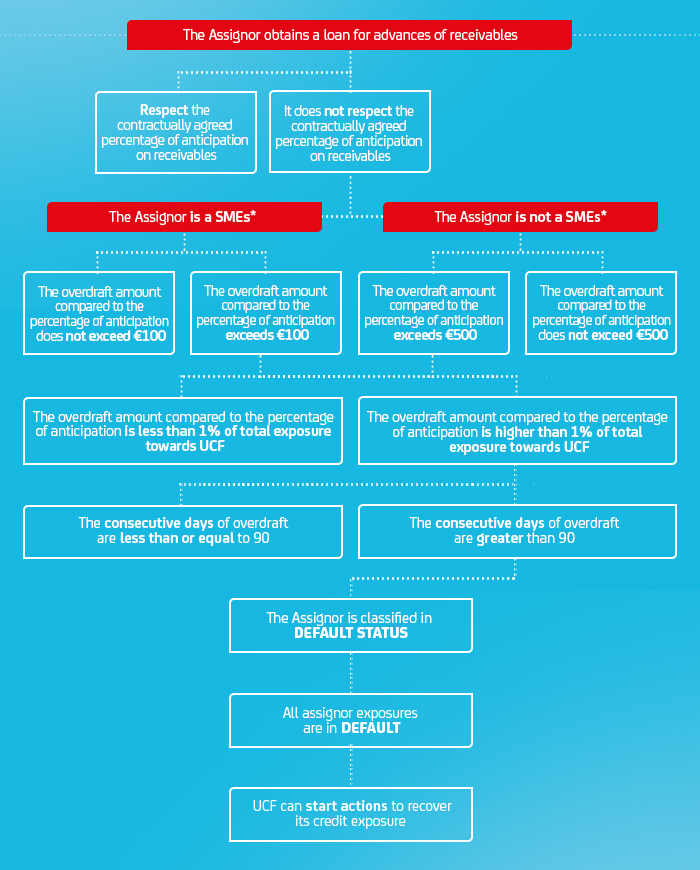 IT IS IMPORTANT TO FOLLOW THE NEW DEFAULT RULES

It is therefore essential for assignors to respect the contractually established part of the advance for receivables and for debtors to promptly meet all payment deadlines set out in the contract and to comply with the repayment plan for debts, ensuring that even small amounts are not neglected, to avoid a default classification that will entail a reporting obligation to the Bank of Italy's Central Risk Bureau.

Here are the answers to the most frequently asked questions (FAQ) about the new Default rules.

1 - If a customer has an exposure in arrears or overdrawn for more than 90 days for an amount below the materiality threshold, must they be classified as defaulting?

If there are no other assessments that the customer will not meet their obligations, they do not necessarily have to be classified as in default. For automatic classification of default, the amount in arrears/ overdrawn for more than 90 consecutive days must exceed the materiality thresholds established by European regulations. The arrears, in relation to one or more existing loans, must be more than an absolute threshold (equal to 500 euros for corporate business and 100 euros for private individuals and small and medium-sized enterprises* and must at the same time be more than 1% of the banking group's total exposure

2 - How are arrears days calculated?

The arrears or overdrawn days, are calculated starting from the day following the date on which the amounts above the materiality thresholds due for capital, interest and fees have not been - including even partially - paid. In the event that payments due to the Bank, as defined in the loan agreement, have been suspended and the deadlines have been changed, the arrears days are counted following the new repayment plan, meaning that the period subject to suspension/renegotiation is not considered in the aforementioned calculation

3 - Can other lines of credit not used by the same debtor be used to offset past due amounts?

The European Banking Authority has expressly excluded this possibility. Therefore, unlike in the past, the bank will be required to classify the company as in default even if it has lines of credit still available with the same bank that could be used to offset the existing defaults and avoid the default classification

4 - For exposures contracted by two or more debtors, jointly responsible for repayment (joint bonds), what happens in the event of default of one of the debtors?

5 - In case of late payment collection, does the bank still have to classify the customer as in default?

There are specific technical situations for arrears where the customer will not be considered in default: 1. Payment system faults; 2. Delayed execution of a customer order; 3. Errors in bank processes that result in a delayed or incorrect credit of the payment made

6 - When can the bank consider the customer no longer to be in a default status?

According to the new regulation, to exit default status, at least three months must pass from the time when the conditions for classifying the customer as in default no longer exist. During this period, the bank must assess the customer's behaviour and financial situation and, after three months, can reclassify the customer as non-defaulting if it believes that their improved credit situation is effective and permanent. Distressed Restructuring is an exception to the rule, the period for which is twelve months instead of three

7 - What happens to exposures that are subject to forbearance measures?

8 - Does a default on a single exposure entail the automatic default of all the customer's outstanding exposures to the same bank?

Yes, if the materiality thresholds are exceeded and the arrears/ overdraft persists continuously for 90 days

9 - In addition to the arrears/overdraft criterion, in what other situations can the debtor be declared as in default

Even where the customer has not had significant arrears for more than 90 days, they can be classified with a default status if the bank considers it unlikely that it will recover the loan without enforcing any available guarantees. The new regulations have made the rules for assessing these default events more stringent

10 - Do the new default rules only apply to banks or to other financial intermediaries?

The new default rules must be applied not only by banks, but also by all non-banking financial intermediaries, which grant loan services of any type (e.g. leasing and factoring companies)

EBA/RTS/2016/06 “New Technical Standards on the materiality threshold for credit obligations past due” integrating the EU Delegated Regulation No. 171/2018 of the European Commission of 19 October 2017

EBA/RTS/2016/06 “New Technical Standards on the materiality threshold for credit obligations past due” integrating the EU Delegated Regulation No. 171/2018 of the European Commission of 19 October 2017